You are here: Home / A tale of a canned life / Lock down and “dirimpettai” 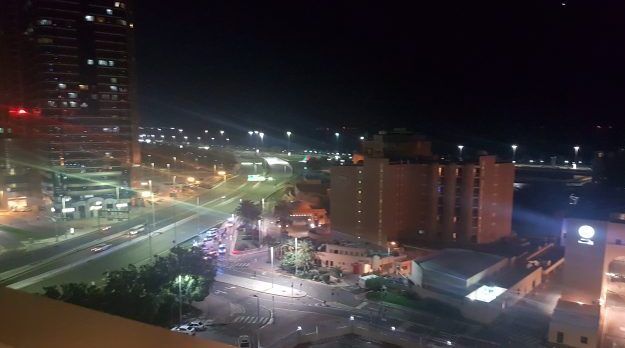 Socializing from the balcony?

Even in the new art of “socializing between neighbors”, following the social distancing rules, our sister Dubai is, in some way, one step ahead.

It is said of a young man who, in the first days of the lock-down, decided to watch a movie, bringing his wide screen TV on his balcony.

Probably the screen was really wide because the guy, not on purpose according to the rumors, was able to involve his adjacent balcony neighbors who participated gratefully to the viewing, with drinks, popcorn and comments. It was kind of a spontaneous “compound flash mob”, compliant with the social distancing rules.

We Abudhabians are more discreet. However, if not for socializing, in this period we have spent much of our life on our balconies. Of course, those who don’t live on the seventieth floor with the windows sealed.

We didn’t do many flash mobs. I have memories of something in the first weekends of lock-down, coming from a nearby compound. It sounded so weird and unexpected in the silence, and it has been heard on the whole Corniche.

I also remember a flash mob in the evening, dedicated to health workers, with everyone on the balconies: the national anthem, the drone, applauses and whistles, taking pictures and videos with the smartphones, but shy greetings between “dirimpettai”. Wait: what I have just written. I can’t find in English an appropriate word to translate our Italian “dirimpettaio”. A “dirimpettaio” (dirimpettaia, if she is a lady) is a special neighbor, living in your same area, in the opposite building, facing yours, not very far. Usually, there are more than one dirimpettaio, so we use the plural “dirimpettai”. Take note of this information. 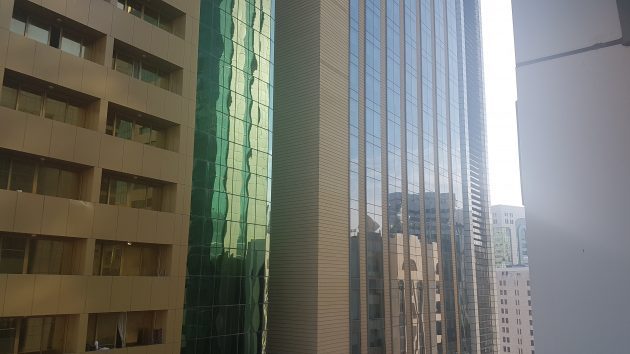 During the pandemic, we all living in areas with opposite buildings, have been forced to discover the existence of “dirimpettai”, ignored in our previous life. We discovered that dirimpettai are, in some way, our mirrors.

April evenings with a perfect weather, the smell of the sea and jasmine coming from the wide-open balconies. Curfew evenings, with vehicles that disinfect the streets, police cars, bickering of cats, stressed out they too, poor things.

And too long nights.

At the beginnings, only Mr. Dirimpettaio 1 peeked out: a gentleman in his forties, Arab features, in a tank top, one cigarette after another, head in his hands, of those who do not fall asleep thinking of a future to be designed with the pieces of a messed-up puzzle.

Then, one floor below, a veiled and composed lady appeared, Ms Dirimpettaia 2, trying to tame insomnia by reading something on her tablet.

And then came Mr Dirimpettaio 5, sleepless father of a family, perfect in managing the spaces of the house: if during the day you want to know what time it is, look at which of his three children is doing homework on the balcony. But in the night, Mr Dirimpettaio 5 looks exhausted and entrusts his lost gaze to the darkness, amid a thousand worries that too easily can be understood.

On the very top floor, luxuriant plants show up but from there nobody ever appears, and I confess I’m curious to ask if they are real plants and what is the secret to keep them so lush despite the forty degrees.

During the day, my dirimpettai appear mostly to smoke or to call over the phone loudly, in the many different languages of the world that I have now learned to distinguish. The days are marked by the diligent alternation Mr Dirimpettaio 5’s children and the appearances of a Filipino lady, Ms. Dirimpettaia 6, whom I admire very much for the refined art of hanging the laundry so accurately that you can forget the iron forever (grazie, Ms Dirimpettaia 6, it’s true that one never ends to learn!).

Every now and then, on alternate floors, someone peeks with the headphones, improvises squats and push-ups, then stops, looks at the sea towards the horizon and sighs.

The dirimpettai trend of these months

After so many observations, it’s now time to sum up the trend of these months.

After two months and more of lock-down, Ramadan and Eid also passed softly, the delicious temperature of early April gave way to a ruthless humidity, and we observe that the night-owls club on the balconies, that was quite large in the first two months, is slowly going to drop in these last two weeks. And it is in sharp decline during the daytime.

We hope that this phenomenon is due not only to the weather conditions but also to other positive trends, such as the gradual resumption of work activities.

Basically we hope to get back – or move forward – very soon to some kind of normal, so we all in the night can go to sleep instead of wandering like ghosts. May be one night we could finally find ourselves on the balcony for the last flash mob: a very short one, to shout only, in relief and to say thank you to all those who protected us during this nightmare, with a wild scream that I imagine will have the same sound in all the languages of the world.

What do you want to know about Abu Dhabi?

You can find out more about which cookies we are using or switch them off in settings.

This website uses cookies so that we can provide you with the best user experience possible. Cookie information is stored in your browser and performs functions such as recognising you when you return to our website and helping our team to understand which sections of the website you find most interesting and useful.

Strictly Necessary Cookie should be enabled at all times so that we can save your preferences for cookie settings.

If you disable this cookie, we will not be able to save your preferences. This means that every time you visit this website you will need to enable or disable cookies again.

This website uses Google Analytics to collect anonymous information such as the number of visitors to the site, and the most popular pages.

Please enable Strictly Necessary Cookies first so that we can save your preferences!